Yes, we have survived another bout of doomsday zaniness and 2013 beckons. I wanted to end the year by giving a shout out to a UK-based blogzine I recently stumbled across: Bad Robot Poetry.

The magazine mixes verse and media in ways that feel dangerous and fresh. Here you’ll find poems in HTML, hashtags, tweets, track changes, screenshots, images and auto translations. The vibe is experimental, punk and sci-fi, and while my own tastes run more traditional, I had to let my inner geek out and tip my tinfoil hat to the editor Catherine Woodward. 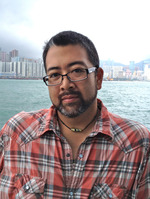 I’m happy to present the second in our series of interviews about being a misplaced writer. Ira Sukrungruang writes about place, and all that means, with humor, passion, and disarming beauty. If he were an ancient god, he’d have three heads–one for nonfiction, one for fiction, and one for poetry, all of which Ira writes. I believe that god is called Unfair.

1) Where do you come from, originally?

I’m a Chicagoan. But if I were in Chicago I’d have to say a Southsider, and I’d have to do it with a sneer and say it with a voice that comes deep from the gut. I might even have to throw in a swear or two just to prove the point. I might have to call you Sally because everyone’s a Sally, which is to say the Chicago I grew up in is a working class Chicago, a concrete and steel Chicago, a Chicago that does not know political correctness.

If you asked my mother, however, she would tell you I come from Thailand. That Thailand was in my blood, no matter what country I was born in. She would say being born does not indicate who you are. Being born is a moment, and a moment is not genetic make-up, does not account for my ancestry, and all the ghosts that has followed her to this country, and the ghost she left for me when she retired and returned to Thailand in 2004.

2) What geographical area would you say defines you as a person and maybe also as a writer? This can be a specific place (New York, Cleveland) or a geographical element (mountains, prairies, ocean). How has this place or element defined your work, if it all?

I’m trying to understand this as an immigrant son and writer. For the longest time, the city defined me, like how the city defined my immigrant family. We felt safe in the city, despite what crimes the TV news reported each evening, despite the gangs, and racism we experienced in the early 80s. The city was about the crowd. There was comfort in a crowd. In a crowd, we could see what dangers were coming towards us. In a crowd, we could blend because in a city there were other immigrants like us, feeling the same way. There were so many hiding places in a city. Our family vacations were always to ultra touristy cities with a lot of artificial sounds. Those sounds were so much more comforting than the sounds of birds or the silence of nature.

Now, however, I’m beginning to see the country as something not to fear. I married a poet, after all, who is in love with the prairie. This has forced me to confront my fears of landscape. And these fears are about trust. My immigrant family never trusted America. Being in the country forces you bond with the land in ways a city never requires. To live in the country, to make a home in the country, there must be a love for the land, but what is also underneath the land. It is also a love of space and solitude. To love a city is to love the assault to the senses that a city represents. Is to love pace. Is to love the music of artificiality.

And then there is the Motherland, Thailand, and stories I have grown up with about Thailand, and vacations to Thailand.Thailand is both mythical and real. Thailand is like the temples that dot the countryside, something otherworldly, some jeweled fantasy land, among the modern high rises of Bangkok, or the rice fields of the central plains.

These three dynamics are what’s in play when I write, whether it be fiction, nonfiction, or poetry. It is a topic I constantly come back to.

3) Describe where you are now–describe a few things you’ve learned about this new place that have surprised/frightened/frustrated you?

I’m in Tampa, FL, now. There’s something wild about Florida. I love when I walk and lizards scurry away from my steps. There is something Jurassic Park about it. I love the birds. I can’t get over them. To see sandhill cranes chillin’ in the medians of busy streets or ospreys nesting on electric poles or pelicans and great blue herons waiting for fishermen scraps. I’m astonished by how the color green seeks to devour everything in the summer. Florida is the south, but a different kind of south. South with a latin beat. South that is diverse in culture. South filled with Northerners. It’s pretty awesome really.

4) How has your current location filtered into your work or your writing life?

I was at literary panel my graduate students were doing at a Florida writers conference, and one of the panelists said something like, we write about the places we’ve been at the place we are. I think this is true. Much of my writing is about Chicago, central Illinois, Thailand, upstate New York. I don’t think I will stop writing about those places. But I’ve noticed that small parts of the natural world in Florida has made into my writing. It’s like the cute little geckos here. They come in without you noticing and leave. Subconsciously, Florida is invading, like a vine that wants devour a house. I think Florida is so different from the other places I’ve been that it will naturally become part of my literary landscape. As a writer, we catalogue the details of setting, and the details of that setting becomes part our lexicon.

Ira Sukrungruang is the author of the memoir Talk Thai: The Adventures of Buddhist Boy and the coeditor of two anthologies on the topic of obesity: What Are You Looking At? The First Fat Fiction Anthology and Scoot Over, Skinny: The Fat Nonfiction Anthology. His poetry collection, In Thailand It Is Night, was awarded the Anita Claire Schraf Award, and forthcoming from University of Tampa Press. He is the recipient of the New York Foundation for the Arts Fellowship in Nonfiction Literature, an Arts and Letters Fellowship, and the Emerging Writer Fellowship. His work has appeared in many literary journals, including Post Road, The Sun, and Creative Nonfiction. He is one of the founding editors of Sweet: A Literary Confection (sweetlit.com), and teaches in the MFA program at University of South Florida and the low-residency MFA program at City University in Hong Kong. For more information about him, please visit: www.sukrungruang.com.

As someone who has written quite a few job description in my corporate life, I was floored by a recent job listing for literary assistants from Darkey Archive Press. Check out why The New York Observer calls it “the worst job listing we have ever seen.”
– Martin Ott

I was hooked the moment I read the opening poem Two Plus Two Equals Five from The Equation that Explains Everything, BlazeVOX by poet and UCity Review editor Andrew Cox.

The poem won the International Poetry Prize from River Styx (Judged by Philip Levine) and I’m thrilled that Andrew is letting me highlight it on Writeliving. I have always been intrigued by poems that are constructed with a single run-on sentence. Two Plus Two Equals Five shows real artistry in traveling far in 24 lines, and using non-elevated language that allows us to follow the broken logic in our lives.

And so a toy drum equals a Saturday Night Special,

a boy grows up to be a foot doctor, a little girl

subtracts yes from no and lives out the sum,

multiplying it by minus one on her death bed,

while a stuffed rabbit equals a lingering good-bye,

good-bye to the one face we’ll never see again,

except in the past (that string unwinding behind us,

and so one wedding gown (packed in mothballs

in a cedar chest in an attic) divided by a field

(blanketed by snow and unmarred by footsteps)

equals a fierce longing and yet, for what, the man

who talks to himself can’t say, only that it has

something to do with frost-bitten  feet and someone

who plays a flute and someone who beats a drum

and many marching forward, always forward

and slightly out of step, always…and so one broken nose

equals the scar from triple bypass surgery and the return

to a simple way of life, if we could only get there,

if we could only find that perfect mattress

on which to flop, the perfect soap for washing off

the day’s residue, the perfect moment to unveil

our new hope in the equation that explains everything. 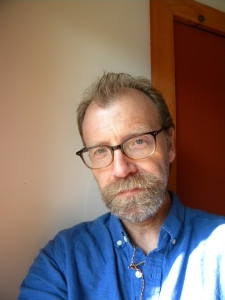 We’re proud to present an interview with the great George Saunders. I think you’d be hard pressed to find any living writer that David and I collectively like more. Hope you enjoy.

Who has been a major influence on your writing?

My father was one big influence, just in the way he tells stories: fast, funny, dark.  But always under the surface was this idea that people were interesting and worthy of attention.

Can you give us insight into your creative process?

Well, I try to keep everything as open and low-concept as possible – that is, I try to keep the big ideas to a minimum and concentrate on making a compelling and entertaining surface in the language, trusting that everything else – plot, theme, meaning – will take care of itself.

Can you share an example of overcoming adversity to keep your writing dream alive?

Although it can be really hard to be a young writer, I’d advise trying not to think in terms of “overcoming adversity” but, rather, trying to use those experiences to train oneself in learning to think like a writer.  So, I can remember times when I found myself in a strange or difficult or even somewhat degrading work situation, and writing was miles away – but I always felt (or tried to feel) like if I was noticing, then I was working.   That is, the young writer can do a little mental switch, and think: “Ah, so this too is part of America,” or “So this too is part of life – these feelings that I’m having and all of these physical details I’m seeing around me, and the reactions of the other people in this situation – are all interesting.”  Not easy to think that way, but if you can nurture that tendency in yourself, it becomes a sort of armor.

How does your background in geophysical engineering impact your writing?

One huge way was that it got me out into the world.  I worked in the oilfields in Asia and that was really where my political ideas were really formed – seeing all the suffering and beauty and inequality.

In what ways does being a teacher affect your writing?

I really like being around the talented young writers we get at Syracuse.  Last year we got 520 applications for 6 spots – so the students are just incredible writers and human beings.  I  also like having to revisit the classics I teach (mostly the Russians) and finding new depth in them.

George Saunders, a 2006 MacArthur Fellow, is the author of seven books, including the “CivilWarLand in Bad Decline,” “Pastoralia,” “In Persuasion Nation”and the forthcoming “Tenth of December,” which comes out in January.  He teaches in the creative writing program at Syracuse University.