Even as I find myself reading Truman Capote’s Breakfast at Tiffany’s and Brigit Pegeen Kelly’s Song that doesn’t mean I haven’t carefully been tracking the best of 2014 writing lists that have been appearing. Please enjoy this roundup and I hope you take the opportunity to support your fellow writers. Happy holidays!

Africa Is a Country | Recommends Best Books of 2014

Amazon.com | 2014 Best Books of the Year: Literature and Fiction

The Atlantic | Best Books I Read This Year: Staff Selections

Bustle | 7 of the Biggest Book Controversies This Year

The Economist: Books of the Year: Page Turners

io9 | The Best Science Fiction and Fantasy Books of 2014

The Philadelphia Review of Books | 14 Poets for 2014: The Year’s Best Books

A few weeks ago Martin Ott asked if I’d share my publication story with his readers. For those who don’t know, Martin and I attended graduate school at USC together and co-wrote a screenplay we pitched to a talent agency. Before that, I had educators along the way who helped foster the idea of becoming an author — and a wife willing to go along with the sacrifices it takes to get there.

In the mid-1990s, I had finished my undergraduate work in English with a Writing Emphasis at the University of Washington in Seattle, feeling like I still had much to learn about writing a novel. My craft wasn’t there yet, and I knew it. It’s been said that while some authors write for the process, others write to get published. I fall into the latter category and knew I needed to perfect my craft, so I entered USC’s Masters of Professional Writing Program. During my time there I met adjunct professors who helped me greatly, worked at a talent agency, and was lucky enough to meet Martin.

After Los Angeles, my path to publication nearly get derailed many times. Saddled with a student loan, I found myself working at KING TV as a news producer. My wife — a reporter at the station – was kind enough to let me shift to part-time work to finish the first novel before we had children. I wrote the second. Took three before one landed.  My son was born somewhere between two and three.

Back then, the trick was still about getting out of the agency slush pile, and as I felt so many queries were not being read, so I began to attend conferences. I volunteered at the Pacific Northwest Writers Association summer conference, working with the agents and editors behind the scenes. I pitched to many literary agents over multiple years, listening to the their reasons for declining representation for the first book, set it aside and wrote the second manuscript based on their feedback. The second MS came even closer to acceptance — by then I was hearing agents tell me I had nearly hit it out of the ballpark, but needed to refine my craft — so I put book two down and started the three novel with their advice rattling about my brain. Book three, The Undying, finally found a home.

Shortly before it did, I had a dozen agents who were ready to see my third novel. I sent the MS out in July in 2011 and months later received the phone call from the 212 area code from one of the agents I had met at the PNWA’s summer conference. I signed with Barabara Poelle of the Irene Goodman Literary Agency and she found the book a home at a new Simon & Schuster imprint, Simon451. My editor, Sarah Knight, acquired The Undying as the first novel for Simon451 and it dropped this October. They’ve since acquired the second novel in trilogy to be released in May, 2015.

This last October, the publisher flew me to New York to attend the NY Comic Con. I was lucky enough to sit on a panel with R.L. Stine. I still work with the PNWA, helping run their agent and editor pitches at th summer conference.   I’m currently editing The Undying: Shades while working on the publicity side of things. It’s all oddly familiar to other authors’ path to publication, I’m sure. Expect to sacrifice a lot. Hope for help along the way. If you want to land an agent, I’d recommend attending a conference. Listen to why the novels are rejected. And most importantly, write a kick-ass book. 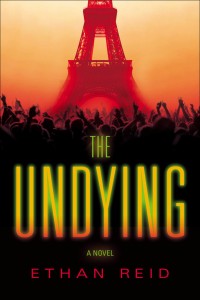 Author of The Undying (Simon451, 2014) and The Undying: Shades (2105), Ethan Reid received his BA in English from the University of Washington and his MFA from the University of Southern California’s MPW Program, where he studied under author S.L. Stebel, Oscar-nominated screenwriter Sy Gomberg, and Oscar-winning screenwriter Frank Tarloff. Ethan is a member of the International Thriller Writers, the Horror Writers Association, and the Pacific Northwest Writers Association. He lives in Seattle with his wife and son.