My third installment in a series of recycled reads – a review of books found in my  local Goodwill – is The Poisonwood Bible by Barbara Kingsolver.

Published in 1998, The Poisonwood Bible has been widely praised and was nominated for a 1999 Pulitzer Prize. The story follows the Prices, a missionary family, that moves from Georgia to the Congo in 1959. The story is told by the women in the family: Orleanna, the abused wife of patriarch Baptist minister Nathan Price, and their four daughters: Rachel, Leah, Adah, and Ruth May. There is a political undertone throughout the novel focused on the abuse of Nathan Price on his wife and children, and the abuse of the United States and European powers on the Congo, and the entire African continent.

There’s no doubt in my mind that this is an important work of fiction, and it is a book I highly recommend for readers. As a writer, I found myself thinking about a few decisions that the author made that potentially undercut the novel:

Length – The main plot arc is Shakespearean in the way it follows the tragic, headstrong, and ill-advised decisions made by Nathan Price and the escalating danger he puts his family in, leading to the death of his youngest daughter Ruth May. Imagine The Lord of the Flies, if the second half of the book followed the lives of the survivors over the next twenty-five years after being rescued. The politics of Africa shown over the final decades of the novel  are fascinating, but feel like a second story has been tacked onto the first (and more powerful) one.

Antagonist is Abandoned – Nathan Price, at the moment he puts his daughters in the most danger, disappears almost entirely in the narrative, and is not present in the moment when the mother and daughters decide to leave the mission. Nathan turns into a ghost, a rumor. Perhaps this is because it is Kingsolver’s intent to have the larger antoginist to be patriarchal America vs. the family patriarch. For me, the lack of active conflict before the climactic moment of the novel took away from its overall impact.

Author Intrusion – There are times in the narrative when the diary-like voices of the daughters are abandoned for a narrator’s voice giving us the horrific background to the political upheaval caused by Europe and the United States in Africa. This sometimes happens with an occasional paragraph and in other cases, as with the ending, there are longer stretches where the narrator sums up the meaning of the story for us. All of this additional context if powerful, but it pulled me out of the drama of the core story.

As writers, we are always looking to take lessons from every book we read. I have no doubt that others may disagree with my analysis. Please feel free to comment below. 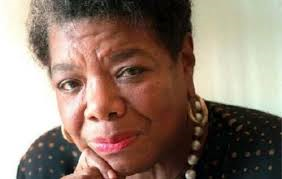 May brought us its fair share of bad news, controversy, and cool writing tips. Here’s my roundup of internet literary news for May 2014.

America Loses One of Its Literary Beacons: Farewell to Maya Angelou

I remember very clearly the class at the University of Michigan when I read I Know Why the Caged Bird Sings. Maya Angelou had a huge impact on many writers and readers during her long writing career and will be missed.

A memoir about a young holocaust survivor killing a Nazi solider and fleeing into the woods to be adopted by wolves sound like something Hollywood might cook up, and in the end the memoir turned out to be untrue. Misha Defonseca was order by a judge to repay$22.5 million from Misha: A Mémoire of the Holocaust Years. It turns out that she was in school in Belgium during the time period portrayed in the memoir.

The Importance of Operational Theme in Creative Work

Writer/producer Javier Grillo-Marxuach wrote a compelling case for why TV shoes such as Lost and Breaking Bad relied on an operational theme to drive the show (independent of plot). The applicability, though, extends to fiction (and perhaps even poetry) – it is valuable for writers to understand theme as much as character, plot, setting, and voice.

Writer and critic Seth Abramson created a heated debate on Facebook, Twitter, and multiple sites after publishing The Last Words of Mass Murderer Elliot Rodger Remixed Into Poetry on Huffington Post. Although he provided rationale for his metamodern poetry, some questioned whether he was using the incident for personal gain and that it is always too soon to grab personal attention for a tragedy. Some writers encouraged others to contact HuffPo editors to remove Abramson and Omnidawn issued a statement about their disappointment in Abramson, co-editor of Best American Experiment Writing, and that they would not be publishing future volumes of the anthology. Others have supported Abramson’s intention to try to craft art out of senseless violence and have called on those piling on Abramson to look harder at his stated intention behind the poetry remix.

There is a debate brewing about whether some books assigned in literature classes should include warnings of subject matter that could cause undue stress. A draft guide on trigger warnings from Oberlin College cited Chinua Achebe’s Things Fall Apart. These trigger warnings were also proposed by a Rutgers student earlier this year for a variety of scenes that reference gory, abusive, and misogynistic violence in F. Scott Fitzgerald’s The Great Gatsby. This topic continues to spawn a lot of discussion online and in social media.